INFOGRAPHIC: Water and Women, an Analysis 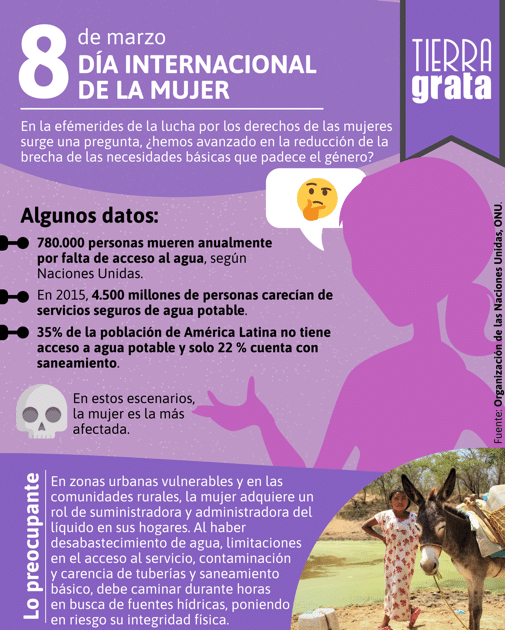 According to the United Nations, in 2018, 780,000 people died of thirst in the world. The same organization warns that 2 billion people suffer from a lack of clean water, with women primarily affected by a lack of fluid.

In the commemoration of Women’s Day, it is essential to put the magnifying glass on a critical issue that does not distinguish gender. Still, women make a more significant effort to cope: the supply of water in communities.

According to the UN, there are a total of 159 million people in the world who must collect untreated water manually, with sub-Saharan Africa being the highest percentage, 58%, highlighting two vital differentiating elements: on the one hand, inequity moves to differences in skin color, with the black population being the most vulnerable, and increasing the imbalances between men and women.

On average, every minute, a person dies from a lack of water. The main problem is the lack of access to this resource in a safe manner and basic sanitation, which affects 4.5 billion people. In 2015, the same number of people lacked secure drinking water services; today, the gap has widened.

One in three people who use safe drinking water lives in rural areas. Columbia reflects that imbalance. In Punta Gallina, a municipality located in La Alta Guajira, mainly women walk for hours under the appeasing sun in search of wells and water fountains to supply their ranch shops.

The case is not isolated in Latin America: it is estimated that 35% of the population does not have access to safe drinking water, and only 22% have sanitation. The knowledge exacerbates these indicators that by 2050, 52% of the population and 45% of the World’s Gross Domestic Product will be at risk from the water crisis.

The widespread deficiencies are three decades away from leading to water conflicts. It is three decades before the woman in her role as a water supplier and manager in households must walk more hours in search of the liquid, putting her physical integrity at risk. We have three decades to think and seek solutions to ensure the rights that have become the slogan that women want to proclaim for years.