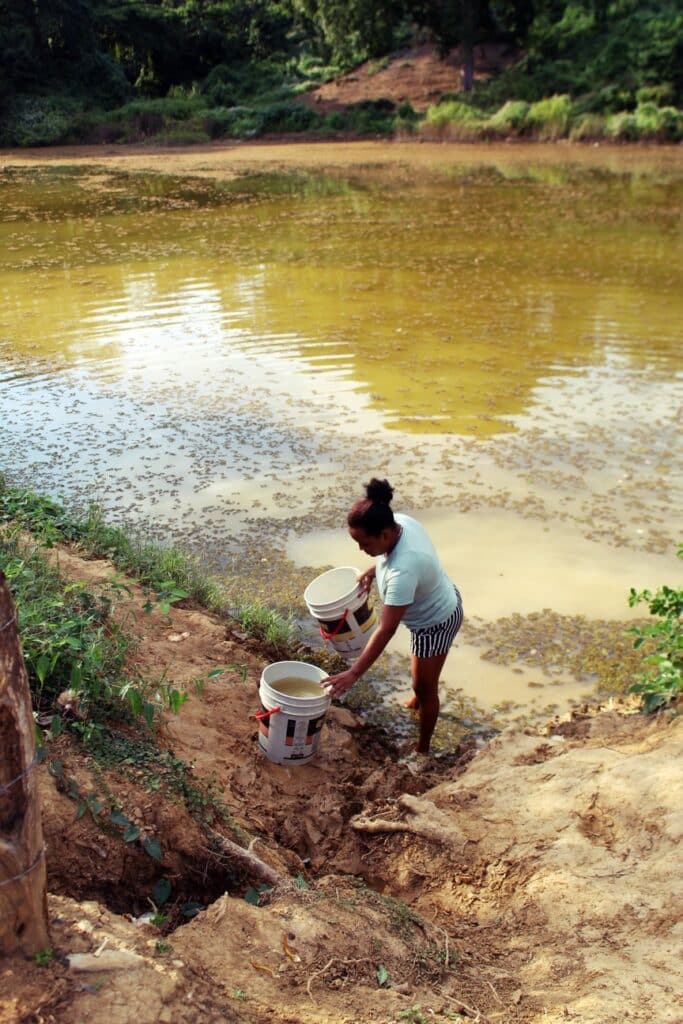 From time to time, Zipacoa, in northern Bolivar, faces a water crisis as the local administration and citizens try to make do with their already depleted water reserves.

The ground on which Diana mata walks is cracked and dry, but at the same time, it sinks a few centimeters with every step she takes. The whole landscape in front of her should look and feel the same, but in this dry season a miracle happened: this is one of the few recent years in which the Poza de la Montaña did not dry up completely. It still has a flooded center and, over it, hundreds of birds fly and wander on the patches of land, while on the shore villagers laden with pipettes and tanks extract the water they use for housework and consumption.

“It has plenty of water”, says Diana, a community leader with a lifetime of service to her community: Zipacoa. This small hamlet is located near the municipality of Villanueva, in the department of Bolívar. Here, drinking a glass of fresh, drinkable water was similar to the luxury of buying a cold soda at the store. Diana says that in this hot place in the Caribbean, although the aqueduct was inaugurated a couple of months ago, “the water runs out a lot and when we have it, it arrives with a lot of chlorine and sand. The children have gotten sick because of it”.

Seen from Google Maps, the lagoon looks like the only bit of water in the middle of the entire Zipacoera land mass, which for years has supplied water to the community. But Diana has seen it dry up for years and, therefore, the fact that it still has water makes her happy: the miracle means that they will not lack water during the summer.

“There are about 150 families living here, including a large number of children and elderly people”, says Diana. None of the houses have access to drinking water. People have to walk to the lagoon. Depending on where the house is located, on average a person has to walk 300 meters every time they need to bathe, wash clothes, collect water for cooking or are thirsty. “It is up to us, the women, and the children who stand in line to fetch drinking water and then carry heavy tanks to the houses, passing through roads and broken, unpaved streets”, she adds.

Diana says this scenario has always been frustrating, but her concern grew with the arrival of the COVID-19 pandemic. In the midst of the sanitary crisis, the need for drinking water was imminent. “When the elderly, mainly, began to get sick, they had to make the effort to buy bottles of water, but it is too expensive every day. Some of them even live alone, so we had to make collections so as not to neglect them”, he explains.

For years, the Poza de la Montaña also decreased its flow for wildlife and livestock. Those who have studied it attribute it mainly to sedimentation and have said that the lack of connections with tributaries can cause it to lose its economic and biological productivity, especially if actions are not implemented to reduce and adapt to the impacts of climate change.

What is happening with the aqueduct?

The lack of coordination between local governmental entities and the lack of inclusion of Zipacoa’s neighbors in the decision making process of their own community are just some of the factors that make the water coming from the recently inaugurated aqueduct a danger.

In addition, although there are elevated tanks in the village where the water provided by the Villanueva Mayor’s Office in times of drought and managed by the inhabitants themselves is deposited, this does not guarantee the permanent possession of the resource, so they have to buy the resource from tanker trucks from the municipality of Santa Rosa, which is stored in private pools, and then sell each 20 liter tank for $600 COP. This is in addition to the transportation of the pimpinas in a buggy to the houses, at a cost of between $1,000 and $1,500 COP each way.

Natural phenomena such as El Niño, make Zipacoa and other areas of Bolivar a territory prone to prolonged droughts where, although it rains, it rains unevenly: little in summer and too much in the rainy season, according to IDEAM.

“Although the last administrations have made important efforts to provide the population with drinking water, what they have not remedied are the inequalities among users. Drinking water coverage is better in urban areas than in rural areas“, says Diana.

Today the faith of the inhabitants is in the reactivation of the Metropolitan Area of Cartagena, of which the District and the municipalities of Clemencia, Santa Catalina, Santa Rosa, Villanueva and San Estanislao are part. The same was formed in 1998, however, so far this administrative figure has not been implemented.

According to journalist Yessica Rivera, the document presented an outline of the six territorial entities that make up the metropolitan area, detailing the population, territorial extension, population dynamics, economy, public finances, education, poverty, health, among other aspects of each municipality. In addition, an environmental component was included, which specifies information on protection and conservation areas, special ecosystems and environmental risks.

He added that this becomes a relevant resource for future work on territorial planning, precisely because of the “Integration between cities” project, which goes beyond the Metropolitan Area, allowing the coordination of design, implementation and evaluation processes of public policies, greater regional competitiveness, decentralizing and optimizing the management of resources, consolidation of a sustainable vision of the territory, greater and diverse employment alternatives, mobility from one city to another without major costs, as well as the development of high-impact infrastructure projects.
In a community like Zipacoa, where the main economic activity is agriculture, the lack of a constant and sustainable supply of water resources makes it more difficult to work. In addition, the consumption of contaminated water and dehydration are two of the main triggers of chronic diseases in rural populations, as pointed out by DADIS.

“The issue of access to water must be addressed by local and district institutions. The lack of water is going to get worse and we need more planning and the creation of public policies designed for the future. It is unheard of that today we continue to live in these conditions. All this must be accompanied by economic resources that allow us to modernize towards a more equitable infrastructure”, Diana points out.

Despite the unfavorable conditions, today a glass of water in Zipacoa is no longer a luxury. It is drunk in the living room with children and families, fresh and pure. This is possible thanks to the drinking water filters of Tierra Grata’s Agua Grata program, which have a capacity to store 25 liters of this precious liquid, and which have been delivered since 2020 to more than thirty families in the community.

According to the results of surveys conducted, in 2021, 48% of the community was considered vulnerable due to constant diseases caused by the absence or lack of safe water, being led by children and adolescents between 6 and 17 years old with a percentage of 42%, and then adults over 60 years old with 6%.

By the year 2022, it is recognized that a positive social impact has been made, since awareness of the importance of treating water before consumption has been raised through the solution provided by the Organization.

“In Tierra Grata we are partners in the development of the regions or communities where we operate, that is why we always look for ways to join efforts with other entities to help the most vulnerable communities, seeking to contribute positively to the improvement of their quality of life. With this water filter project we are contributing to the health of our communities, which is very relevant today when hand washing and hygiene are so important to prevent diseases”, said Luis Castellanos, Social Management Coordinator of the Organization.

Each filter has a microporous clay vessel inside that is capable of trapping solid contaminants, colloidal silver and carbon, components that eliminate microorganisms and bacteria.

When the water is introduced into the filter, the physical and chemical phenomenon that converts raw water into clean and healthy water begins, thanks to the clay, a material that makes it possible to make the water drinkable. Likewise, it removes mercury and lead and, being hermetically sealed, it is kept free of any pest. Finally, the drip system enriches the water with oxygen and refreshes it.

These filters do not require power sources, additional construction, chemical additives or pumping connections. Also, they have a compact and easy-to-use design that allows families to purify water before consumption, avoiding health problems caused by viruses and bacteria.