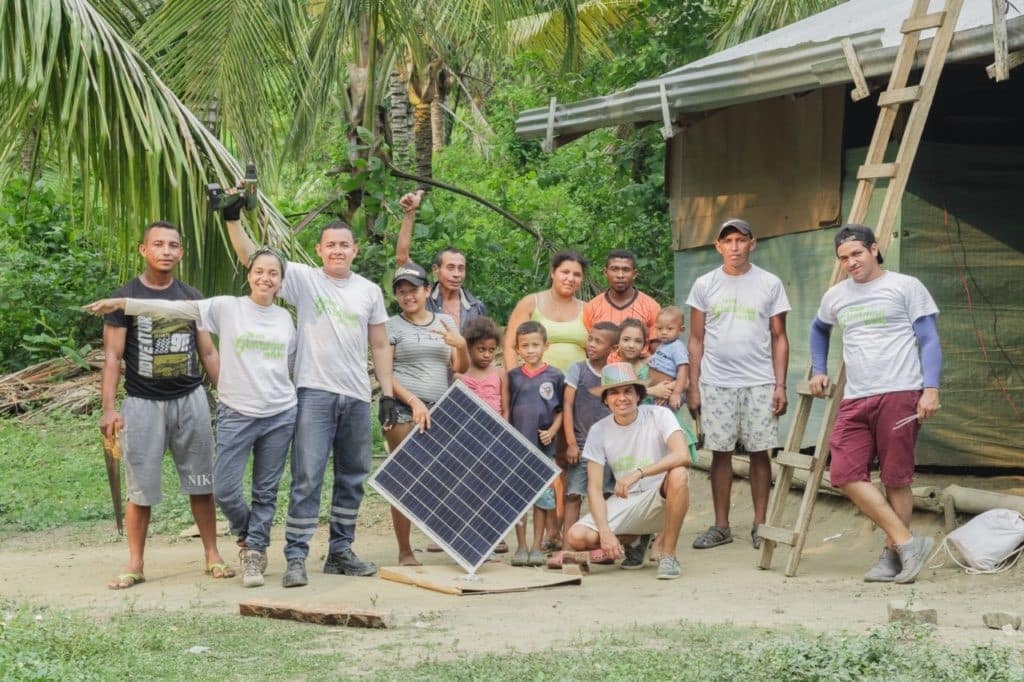 A solar panel rests on the roof of Birsa Aragon’s house in the village of Hondible, Montes de María. Birsa, who is 80 years old, explains that she has lived there for over 30 years and explains that he once lit up his house thanks to a panel that her son had bought. However, time damaged the solar panel and with no knowledge of solar panels herself, she turned to dangerous gas lamps like many others in her community.

This weekend will see Birsa have a new solar panel thanks to the Casa Grata program from Tierra Grata.

The program, which provides rural communities with electricity, will link 20 families of this village to a solar energy system that allows, in addition to illuminating light bulbs, the ability to charge cell phones and power appliances such as radios and blenders.

Pedro Castilla, president of the Community Action Board of the territory, sees the problem as a great addition as “[for] some to recharge cell phones and make calls, we had to walk up to half a kilometer to the school, the only place on the village that has light.”

This program will increase the quality of life because for families like Pedro’s and Birsa’s, the Casa Grata program will save up to 50% per month compared to what they spent on gas lamps, and also avoid the breathing problems that arise from the smoke of the gas lamps.

Tierra Grata will also install three solar-powered lampposts as part of this program for the public building, the communal hall, and the community school. Each lamppost illuminates an approximate radius of 15 meters during the 12 hours of darkness. In addition, Tierra Grata will provide portable solar lamps to 17 other families for them to allow them to brighten not only their houses but also the roads these families use to move safely at night and early morning.

Alex Durán Macías, co-founder of Tierra Grata explains that “it is necessary to consider other alternatives, such as social technologies and decentralized services, which can not only be cheaper but also more efficient for Colombian rural families”.

Today we are helping 100 inhabitants of the community of Hondible, but there are still more than 1700 rural communities in Colombia who have difficulties accessing energy services according to reports from the Institute of Planning and Promotion of Energy Solutions for Non-Interconnected Areas (IPSE).

More about the Tierra Grata: Tierra Grata provides energy, water, and sanitation services through decentralized, low-cost, and easy-to-install social technologies in rural communities. To date, more than 160 installations have been made in ten communities, improving the quality of life of more than 1700 individuals.